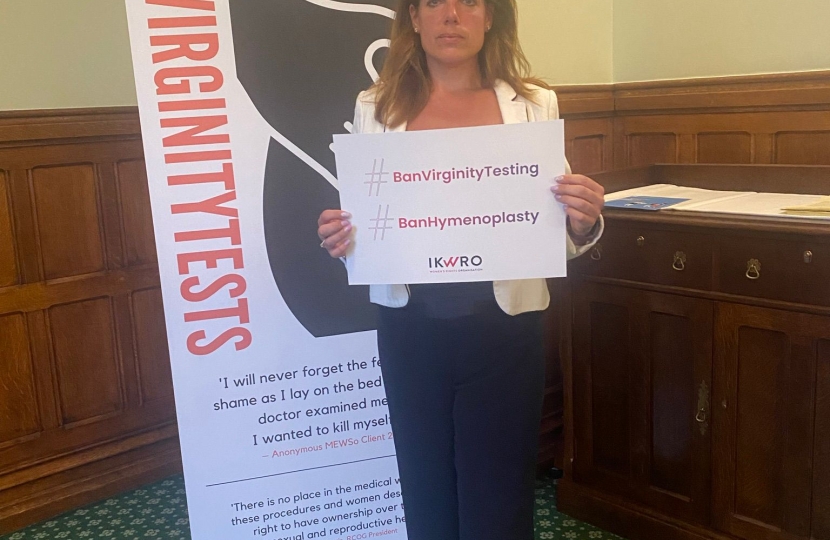 Caroline Nokes has joined a cross-party coalition of MPs and women’s rights organisations in backing New Clause 1 & 2 to the Health and Care Bill, to ban so-called ‘virginity testing’ and the practice of hymen ‘repair’ surgery.

So-called ‘virginity tests’ and the practice of hymen ‘repair’ surgery are both currently legal and are being conducted by doctors in the UK to ‘check’ or ‘restore’ the virginity of a woman, often prior to an arranged marriage.

The World Health Organisation (WHO) states that so-called ‘virginity testing’ is:

“A violation of the victims human rights and is associated with both immediate and long-term consequences that are detrimental to her physical, psychological and social well-being.”

Royal College of Obstetricians and Gynaecologists (RCOG) and the Royal College of  Midwives (RCM) strongly oppose the practices of virginity testing and hymenoplasty on the grounds that neither is medically required in any circumstance and support both the new clauses.

The Government has committed to ‘work to criminalise virginity testing’ through their recently published strategy on tackling violence against women and girls but Women’s rights organisations Karma Nirvana, IKWRO, MEWSo, The Royal College of Obstetricians and Gynaecologists and The Royal College of Midwives are calling for both virginity tests and hymenoplasty are banned at the same time in law.

“Women and girls deserve to grow up free from notions of ‘breaking their womanhood’ so they ‘bleed on their wedding night’. These traumatic practices have no basis in medical science, harm women and girls and perpetuate dangerous myths of ‘purity’.

“We must act now to stop both ‘virginity testing’ and hymen ‘repair’ surgery. That’s why I am backing New Clause 1&2 to the Health and Care Bill as I call on the Government to end this violence against women and girls for good”.

“We are very concerned that women are either being coerced into having these procedures or feel pressurised into having them so they can bleed during sex and can demonstrate they are a virgin on their wedding night.

“The RCOG and the RCM want to see both virginity testing and hymenoplasty banned in the UK. This will send a clear message that there is no place in the medical world for these procedures and that women deserve the right to have ownership over their own sexual and reproductive health.”

“At IKWRO - Women's Rights Organisation, we support women and girls, whose lives have been put at risk of so-called "honour" killing because of virginity testing and who have been severely traumatised and harmed by hymenoplasty. That's why we are working with Caroline Nokes to ensure that these invasive and degrading harmful practices, which are an abuse of human rights, and have no medical or other justification, are banned without delay. We have learned from our experiences in tackling the harmful practices of female genital mutilation and forced marriage, how vital it is to have clear legislation as a deterrent.”

“After a 2 year-long campaign we welcome these new clauses to ban virginity tests and hymenoplasty. These abusive practices should have been stopped long ago. Now it is the responsibility of the community leaders and the Government to reshape misguided attitudes about women's virginity and sexual control”

“We believe that every woman deserves the right to make any decision about her body – free from shame, stigma or discrimination, without pressure to subscribe to ‘gender-based societal norms’, and without fear of harm. This is why we are working in partnership with Caroline Nokes  to bring forward new legislation to end virginity testing and hymenoplasty to help break the ‘virginity myth’.”

“I am delighted to have received the support of Caroline, as Chair of the Women and Equalities Select Committee,  for New Clause 1 & 2. The Health and Social Care Bill is the best opportunity to ban these oppressive practices once and for all. It is great to see cross-party work, alongside charities and health professionals to tackle violence against women and girls.

New Clause 1 seeks to criminalise virginity testing, which are examinations that falsely claim to be able to determine whether a women or a girl has had vaginal intercourse by examining the female genitalia. The examination has no scientific merit or clinical indication as the appearance of a hymen is not a reliable indication of intercourse.

New Clause 2 seeks to criminalise hymentoplasty (also known as hymen repair surgery) which are procedures undertaken which purport to reconstruct a hymen, a thin piece of mebrain that partially covers the vagina. This procedure requires a surgeon to create scar tissue in the vagina, with the purpose of making a woman bleed the next time she has intercourse, in order to give the impression that she has no history of vaginal intercourse.

This week in Westminster we have been considering the Health and Social Care Bill, with some important amendments and new clauses brought forward by the Government.